A number of years ago, Jeffrey Eisen began free-flow journaling to process some of the hurt, challenges, and issues he had experienced in his life. Over a period of time, by choosing this form of “release,” Jeffrey was able to quiet his obsessive mind and allow an inner knowing or essence to come forward and begin expressing itself.

In putting pen to paper in a free-flowing, relaxed way, Jeffrey found that what appeared on the page in front of him felt “familiar” but wasn’t actually coming from him. He realized that he, in fact, was channeling something bigger and more powerful than himself. He sensed that these messages were being told to him and felt compelled to continue writing, transcribing them to the best of his ability.

As Jeffrey continued on his own journey of self-discovery, he’d often turn to these journal entries or messages, reading them to gain clarity about challenges or issues he was facing. He found them surprisingly insightful and helpful often just the “answer” he was looking for. The more he integrated them, the more these teachings became a way of life that transformed everything about Jeffrey’s existence.

Jeffrey decided that these messages were too powerful to keep to himself and the importance of sharing them with as many people as possible became evident.

At first, he had no idea what form this would take. How would he share his private, handwritten journal entries in a way that would resonate and help others? He decided to comb through each journal entry, a purging of his innermost feelings, and extract the messages that could be shared. These messages had come to him through his pain and suffering, but when they stood on their own their power became even more profound. From years of journal entries came 16 distinct messages that he was excited to share with the world. These became the Messages from Shaltazar CD. 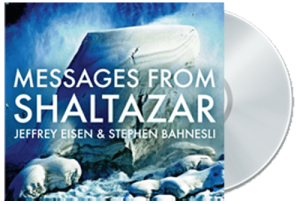 The more Jeffrey developed his relationship with this invisible entity, the more it showed up in his life. It identified itself as Shaltazar. Jeffrey tried not to question too often the details about what or who it was because he was more interested in the wisdom that was coming through him when he connected to it.

In his one-on-one coaching sessions, Jeffrey would often lead short guided meditations, and he found the influence and wisdom of Shaltazar coming through time and again. It started to feel as though Shaltazar was always there, hovering in the “background” of Jeffrey’s life, coming forth to speak through him when the time was right. Jeffrey had to learn to make space or establish the ideal conditions for Shaltazar to speak through him most clearly.

For years Jeffrey had been leading meditation groups, and over time he realized that he could essentially “get out of the way” and allow the voice of Shaltazar to be heard by all those in attendance. Jeffrey would speak, but the words were not his own. He was merely a channel for all this divine wisdom. Since the messages from Shaltazar had begun as written word, it took Jeffrey some time to get comfortable speaking them aloud as they came to him. At first felt uncomfortable, wondering if it would come across as though he were speaking as Shaltazar, which he knew he wasn’t. With time though he found his place as a channel, and as this ease was established the voice of Shaltazar became clearer.

Jefferey would record all the channellings he delivered to these meditation groups, wanting to be able to re-play them and really listen to the messages coming forth. Eventually he had them all transcribed into text. These channeled messages were longer and more complex than those he had journaled originally. Together they began to form an extensive body of Divine wisdom. None of these presented themselves in a logical or linear way—they just came through as they did. But what Jeffrey found was that each could be categorized into a common theme or ‘teaching.’ While the messages were different—the themes kept coming up time and again.

Having already produced the 16 original Messages from Shaltazar CD, Jeffrey wanted to share this more extensive body of wisdom with a wider audience. He contemplated compiling the longer channeled messages with the shorter written messages into a book. However, he has come to believe that this wisdom is best understood and integrated in a more sensory way. He, therefore, decided to create the Shaltazar website incorporating audio, video, and the written word in hopes of sharing this divine wisdom was as many people as possible all over the world. 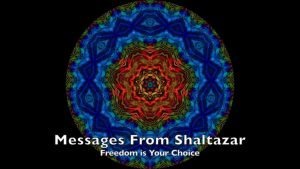 These messages are also available on the Shatalzar YouTube channel. Jeffrey has also created the Shaltazar podcast to help people further understand and integrate the wisdom of Shaltazar. And most recently the Shaltazar messages are being uploaded to the Insight Timer app. As well check out the Shaltazar blog for ways to apply this wisdom in your life in a practical way.

These 60-minute Discovery sessions are my way of giving back to the world. I look forward to chatting with you to see how I can assist you on your life journey. I may uncover something that changes your life in a big way.